What the curriculum thinks you need to know:

What you need to know (The theory):

So, we pick a nerve, put an electrode over it and place another electrode elsewhere on the patients body. Typical nerves used are the facial nerve (easy to get to under drapes), the ulnar nerve and any of the nerves in the lower limb (my personal favourite here is the sciatic at its bifurcation in the popliteal fossa).

The problem is, how much current to apply?

If we look at a nerve, we see its made up of multiple fibres. To get a consistent response, we need to make sure all of these fibres are depolarised and activated. The fibres further from the electrode will get less current to them than those closer due to impedence of the tissues (see here for more on this, its just Ohm’s law again….). if we apply a few milliamps to the nerve we will get a response but it may be different every time due to the differences in fibre activation. So, we just apply a massively over the top current to make sure we activate all the fibres. 70-80mA is usually the quoted figure, the so called ‘supra-maximal stimulus’.

The further from the skin, the less current gets there due to tissue impedence.

With no neuromuscular blocking agents on board, we’d expect a ‘normal’ twitch, but as we add increasing amounts of blocking agent and block more receptors, the twitch strength decreases until it disappears.

What you need to know (How it works in practice):

What we want is a quantification of the amount of NMB that is present.

Pretty useless for assessing amount of block lack of repetition (see below!) and the subjective nature of its assessment. 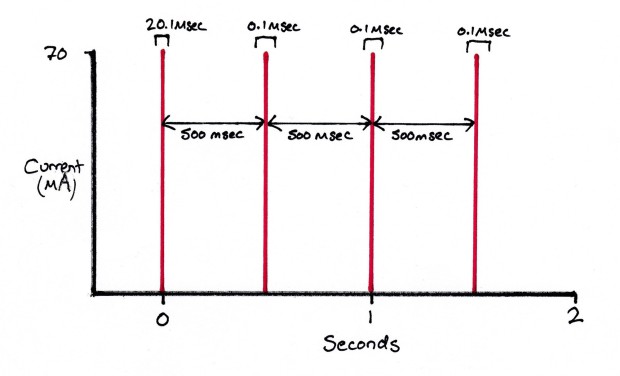 The Train of Four stimulation pattern (Note it only takes 1.5 seconds, not 2)

The train of 4 allows assessment of amount of block due to the fade phenomenon (see below). Upto about 70% receptor occupancy, there are 4 equal twitches. The twitches begin to fade above this level, with approx 80% occupancy decreasing the last twitch intensity and all the twitches disappearing above 90%.

Remember that all 4 twitches are present with 70% of receptors occupied, hence some people can seem partially paralysed with 4 twitches present. Remember ‘normal’ people have waaaaaay more ACh receptors than they need (the ‘margin of safety’ effect), but some have less (think autoimmune conditions which destroy your neuromuscular junction) or are reliant on having full receptor function (think people with COPD or muscle disease).

The train of four assessment can be made more accurate by using an accelerometer or strain gauge to assess the strength of each muscle twitch.

So what if we want to assess block levels less than 70% receptor occupancy? 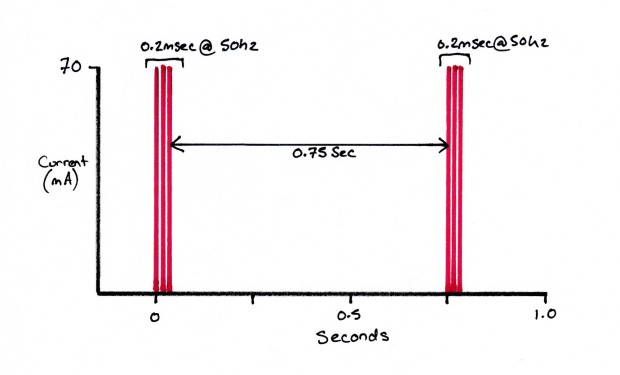 This is used to assess lower levels of block. The second set of twitches decreases in intensity with much lower receptor occupancy than in the train of four. Studies have shown it is easier to determine a small amount of block with DBS than with train of four. Note this only applies to visual analysis of the twitches, not to analysis with an accelerometer or similar. 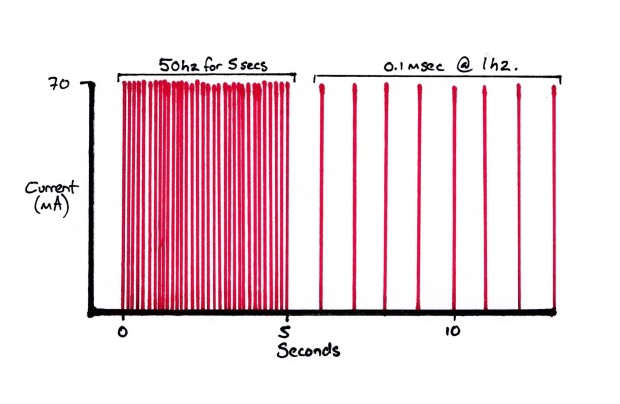 Post tetanic count is used to monitor deep levels of block where train of 4 and DBS would be ineffective. A 5 second tetanic stimulus is applied followed by 0.1msec twitches at one per second. The subsequent twitches are visable due to mobilisation of acetylcholine at the neuromuscular junction by the tetanic stimulus (so called post tetanic stumation). The number of twitches present is inversely related to the length of time until recovery from block. A twitch count of 9 is said to correlate to the return of the first twitch in a train of four.

Be careful however, the acetylcholine released by the tetanic stimulation hangs around for quite a while, so can give misleading train of 4 counts for a good number of minutes after its usage.

Random Exam factoids (i.e. the things the college like asking):

© Sam Beckett and Physics4FRCA, 2018. Unauthorized use and/or duplication of this material without express and written permission from this site’s author and/or owner is strictly prohibited.