Please Note this post has no pictures yet, I haven’t got round to scanning them in!

Please What the curriculum thinks you need to know:

What you need to know (The theory):

A capacitor is a device which stores electrical charge. Simple. See Electrical Basics for a bit more information on this…

Capacitors are made of two conducting plates and a sandwiched non conducting dielectric. The Plates can be made of any material which conducts electricity (examples include various metals and carbon). These can be shaped as films or beads (hence the different shape of the electrical component). The Dielectric is commonly made of materials such as ceramic, mica, glass or even paper. You can even make your own if you’re a real geek 😛

Capacitor symbols – There are loads of these, stick with the one in the top left.

The value, or ability of a capacitor to store charge is measured in the Farad (after Michael Faraday).

‘One Farad is the ability of a capacitor to store one coulomb of charge when a potential difference of one volt is applied across it’.

Note that one farad is a huge unit of charge. In most consumer electrical circuits only capactiors upto μf will be seen. Capacitors with values of multiple farads are only usually seem in power supply units and similar.

Great, but how do they work? Lets put one in a circuit:

Electrons initially flow to one plate of the capacitor. They cannot cross to the other plate as there is a non conductor (the dielectric) in between. Think of the capacitor having a number of seats for electrons, these seats will fill up with electrons and cause the plate to become negatively charged. This negative charge will then repel electrons off the other plate and cause flow of electons to continue around the circuit… for a while. Eventually the second plate will run out of electrons and flow will cease.

This helps explain the way that capacitors work in different kinds of circuit.

In a DC circuit the current flows in one direction. Hence a capacitor in series will initially allow charge to pass as it has electrons available on its 2nd plate, but as these electrons ‘run out’ the current passed will decline, But the charge stored by the capacitor will increase. Eventually current will cease to flow. In reality this happens in a matter of milliseconds and isn’t noticeable. 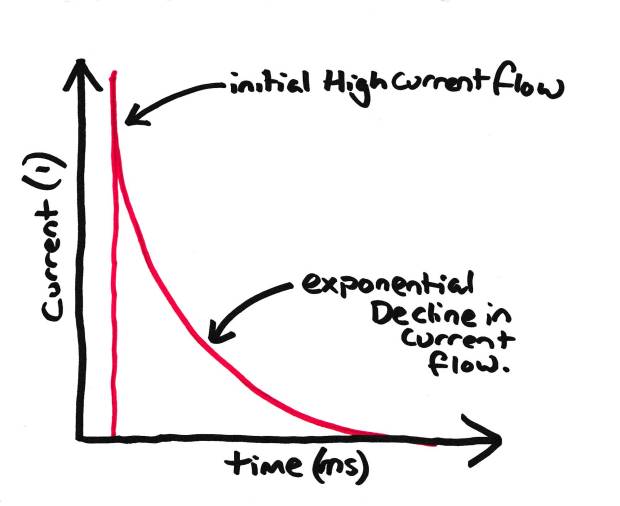 In an AC circuit however, current flow alternates in both directions, so the capacitor will charge and flow will decrease, but then the current direction changes so now the negative plate is full of electrons so flow can begin again:

If we put this in a graph we can see the effect:

Now note how the change in current direction is slow to show the declining waveform clearly. Here, the mean current flow would be very small. In reality, AC circuits alternate much faster, at 50-60hz in the UK. So what happens if we increase the AC frequency?

Here we see that there is little time for the decline in current flow so the mean current stays high, so more current flows the higher the frequency. This explains the usage of capacitors as filters (see below!)

An Inductor is a component which opposes the flow of current by creating an electromotive force.

Inductors work by creating an electromotive force… ie an magnetic field. They are made up of a coil of wire with a core of a ferromagnetic metal (sounding familiar?). Think of those electromagnets you made at school, its the same thing.

When a current flows, the inductors creates an electromagnetic field which repels electrons and hence slows the flow of the current. Think of it as something akin to a speed camera on a motorway, it doesn’t limit the amount of current flow per se, but does slow it down. This can be quite useful in controlling the discharge of capacitors (see below).

Contrary to a capacitor, the inductor allows DC current to flow more freely than AC current. The Electromotive force produced is proportional to the rate of change of current rather than the amount of current flow. Hence in a rapidly alternating AC circuit, an inductor produces a high amount of electromotive force and slows current flow. This explains its ability to filter high frequency current/signals. For the geeks out there, this is basically how a guitar Wah pedal works.

What you need to know (How it works in practice):

So if we take our circuit we had earlier, add a switch and two paddles… Voila! A simple defibrillator. 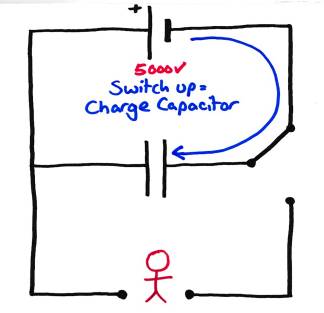 The top half of the circuit charges the capacitor. When the switch is flipped, the capacitor discharges to the paddles.

Now if we look at how this capacitor discharges, the graph is very similar to that of the current flow through a capacitor. Note how the current flow is initially very high and tails off very quickly. For successful defibrillation we need energy delivery, not a certain amount of current. For this reason an inductor is put in the circuit to slow the discharge so that the current is limited (usually to 25-30 amps). This decreases the chance of burns to the patient.

Effect of an Inductor on Discharge of a Capacitor.

All of this talk is for ‘basic’ monophasic defibrillators. Almost all of the defibrillators seen on the ward in the UK today will be Biphasic. This has a (you guessed it!) biphasic waveform so current travels in one direction between the pads, and then switches to travel the other way. These more modern types of defibrillator need lower energy delivery and hence lower current delivery. This has a number of advantages, namely less burns and damage to the myocardium and also decreased energy usage. This last advantage also means smaller batteries and hence smaller size. Not surprisingly, implantable defibrillators are all biphasic in design.

The college also likes you knowing about thoracic impedence. Now for the sake of making things easy, lets change that to thoracic resistance (see electrical basics for the differences between the two). As our heart pumps blood around the body, the volume of blood in the aorta changes. This changes the resistance/impedance across the chest. The change in this impedance is then proportional to the stroke volume (larger change = larger stroke volume). The cardiac output can then be calculated by multiplying this by the heart rate. This is how a thoracic impedence cardiac output monitor works.

Make note that other things change thoracic impedence, these include ventilation (breathing in dramatically increases impedence) and also things like the ‘wetness’ of the lungs (wetter lungs offer lower impedence). These need to be compensated for to measure cardiac output. This is why these monitors tend to be more accurate in the ventilated patient where these things are more… steady.

How to use a Capacitor as both a High and Low pass Filter. Note: This is above the level you need to know, but good to show off if you’re doing well in a Viva.

Random Exam factoids (i.e. the things the college like asking):

© Sam Beckett and Physics4FRCA, 2017. Unauthorized use and/or duplication of this material without express and written permission from this site’s author and/or owner is strictly prohibited.